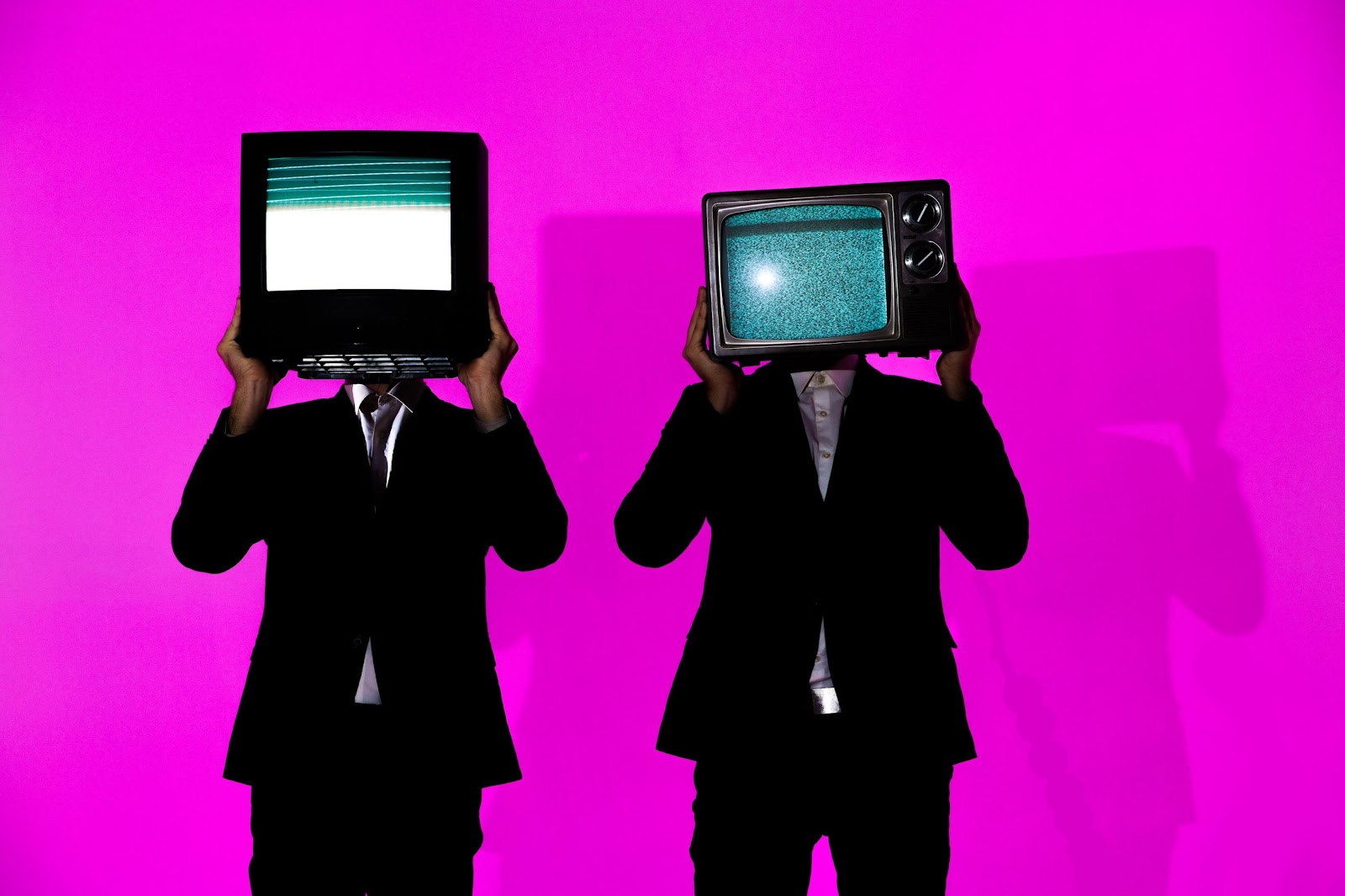 King Complex are a one of a kind band known for unique visually spectacular shows while performing in suits and morph masks, Bracher Brown and Cody Doss sure know how to put on a show in the electronic-rock music scene. Strong rock guitar riffs mixed with futuristic electronic-pop, King Complex break these layers of musical genres and warps them into their own while effortlessly bridging that gap between them many have not explored to its full potential. 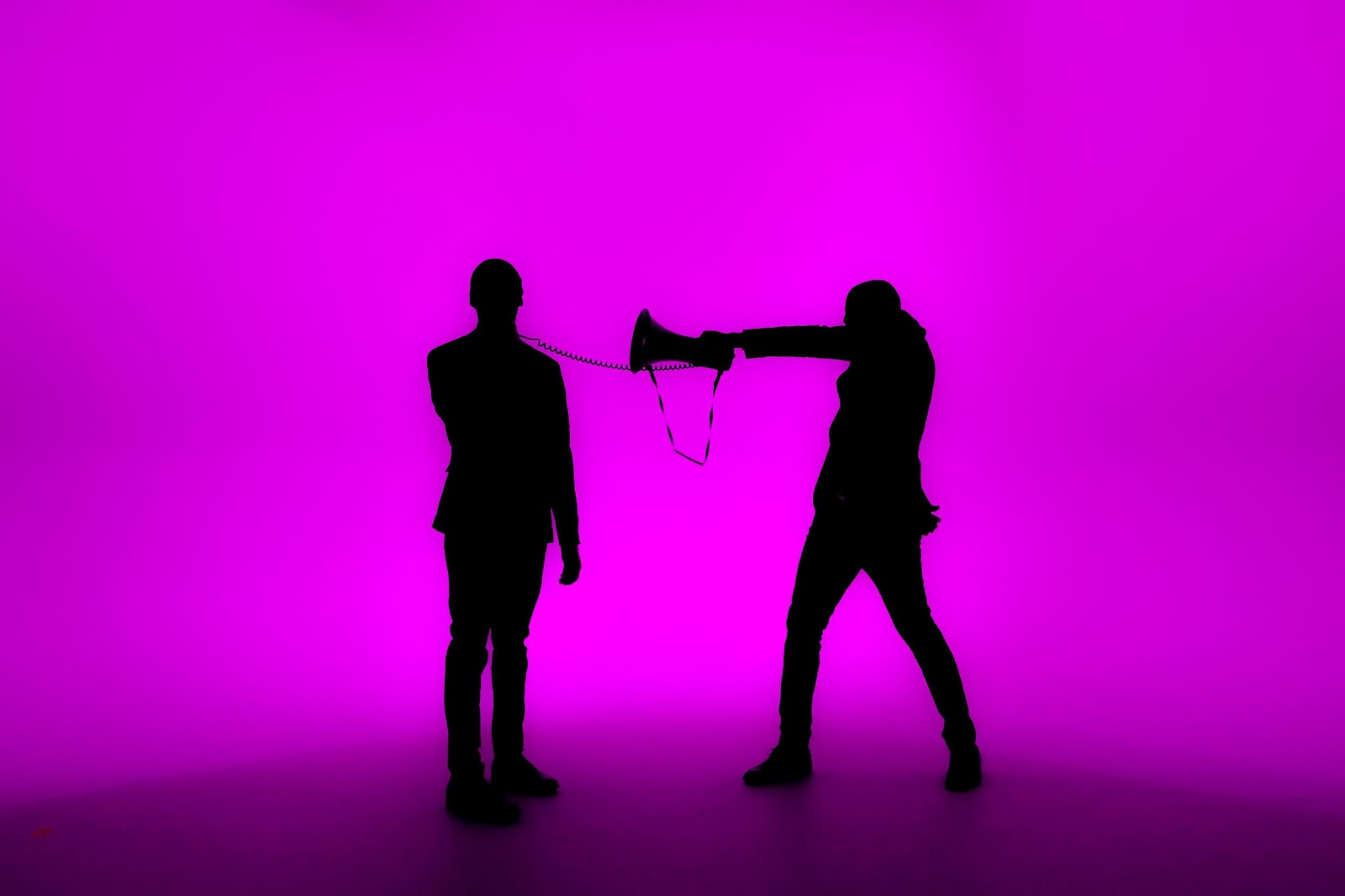 Five singles into their ‘new era’ for the band, King Complex is getting set to release their freshest single “They Don’t Need to Know” just as summer is about to hit. This song is one of a kind, perfectly textually layered melodies with catchy rhythmic lyrics that continually build throughout the song that all blend to deliver one spectacular song. King Complex have smashed it out of the park with their latest single with by the end of listening you are already hitting that repeat to listen to it again and again.
Make sure to check out King Complex new single OUT the 7th of June “They Don’t Need to Know” available on most streaming services.

I had the pleasure to interview the wonderful King Complex to talk about anything and everything.


Sound Rebel Magazine: Thank you guys for taking the time to sit down and talk with me about your upcoming single, how are you guy’s both feeling about the release? Excited? Nervous?

SR: For those who have maybe not heard of you before, how would you describe King Complex in a few words?

BB: Deeply apologetic
CD: An art project made by children with access to a gratuitous amount of popsicle sticks.

SR: So, I got to listen to your new single “They Don’t Need to Know” and it honestly has to be one of my favourites of 2019 as it is so effortlessly fits together lyrically and mellifluously.How did this song come about? what was the creative process behind creating a song like this? And Individually what does the song represent/mean to you?

BB: I was making a joke on snapchat about how a song is written. I finished up a very rough version in about 30 minutes and hung on to it for two years. I wasn’t even sold on the song after I finished the demo but Cody dug it up and made a gigantic production masterpiece out of it and I can officially vouch for its quality. The song has attachments to a very specific place and time, but the grand theme of it all is the moral grey area that goes into night life culture. 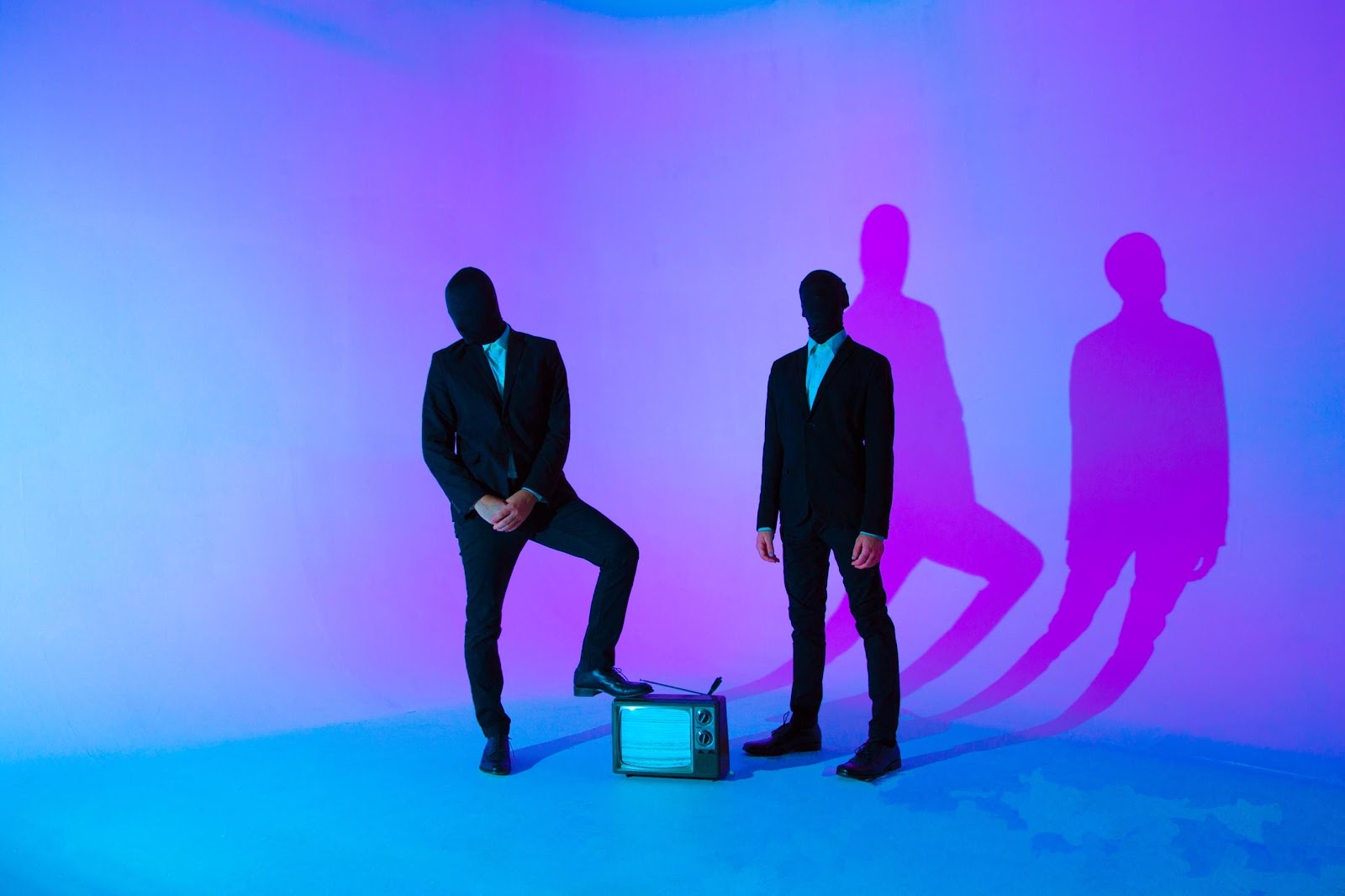 CD: Aw! You’re sweet. I’m glad our little vessel of emotion did it for you. Bracher showed me a demo that he thought was a joke pop song, as in “hey look at how pop this is, could it be more pop”? And I said hold up there’s something actually in here behind the steel drum synths and and Logic beat loops. It was the vocal. I loved the melody. I had a vision of taking it to a deeper, stranger, more glow-in-the-dark sort of place but all of the vocal parts did stay.

SR: You have said before that this is a new era for King Complex, how so and why? Is it due to releasing these singles that are expanding on this genre of electronic-rock that not many people and bands have explored successfully before?

BB: With any King Complex release, this one is a bit of a middle finger to our last ep. We seem to have a habit of making something and immediately deciding that’s not us anymore. I think the last release was very unstructured and abstract, intentionally so, these last few releases have been a conscious song writing effort to make direct pop music with very traditional pop form mixed with our lyrical and production tendencies.

CD: Oh no I think all we meant is, well, it’s just that it’s our time of month.

SR: One very distinguishable feature about your band is the ski masks and suits. Who was the one to decide that this was going to be your image for the band? And does having this kind of “mystery” in a way help you separate your music/stage life from your personal life?

BB: Kevin James. Ever since Paul Blart Mall Cop 2, Kevin James has been a big supporter and main influence in every decision we make. I haven’t taken off the mask off in almost three years. Having not seen my own face since then it has only added to the confusion. I don’t know who I am anymore.
CD: They’re not ski masks! They’re morph masks. More Halloween less bank robbery. We both had the mutual idea at the same time I believe. In regard to separation between music and personal life I pretty much do music all of the time, so I don’t feel that they’re separated in that sort of way in my waking life. However, during the performing, it does encourage me to be weirder than I probably would be otherwise. 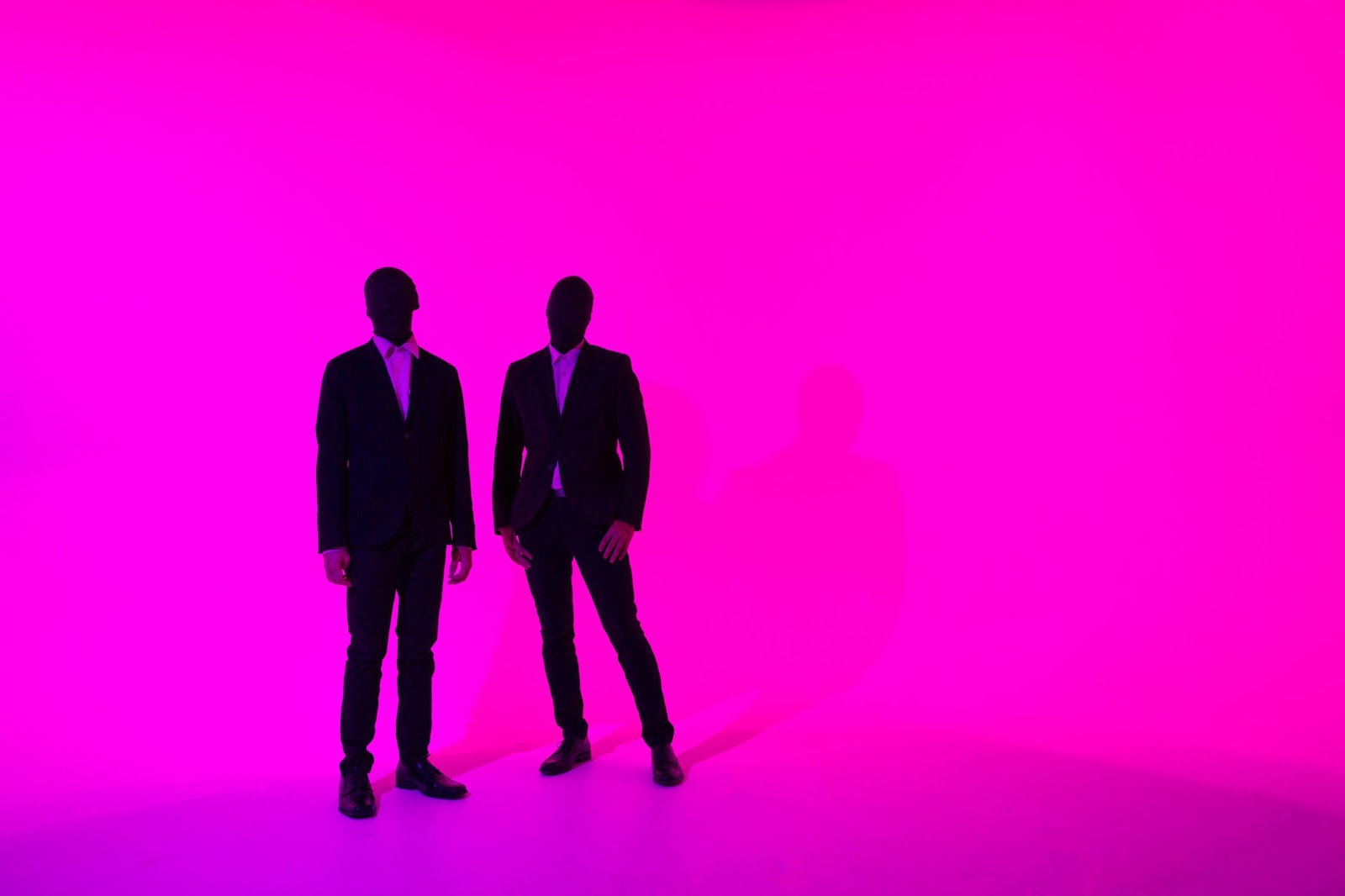 SR: Which of your own songs was your favourite to bring to life on stage or one’s you have yet to release that you are buzzing to play on stage?

BB: I think Fallin For You has become one of my favourites to play live. The song has a lot of really big moments dynamically and it’s fun to just slam on the guitar for a little while.
CD: They Don’t Need To Know is often my favourite of the night. I start screaming when the metronome comes in my headphones.

SR: Favourite show you have played to date and one city or country you have dreamed to perform?

BB: We played at Respectables in West Palm for bumblefest a year or so ago that still sticks out as one of the most energetic crowds we’ve ever played for. I think playing the Troubadour in LA would be cool just for the history of the venue.
CD: Sunshine Ranch. Inside joke sorry.

SR: Post-show or even in your spare time, what helps you to unwind and relax as well all know that the music world is a very stressful and hectic environment.

BB: I am currently working on the world’s largest bath bomb. I will soon release it deep in the Atlantic Ocean and relax harder than anyone has relaxed before.
CD: I like to read a lot. I like going the beach. There’s a swing set in my backyard so often I’ll put on some Tennyson and go out there. And I play with my girlfriend’s bunny rabbit. Shout out to Delilah.

SR: What is the Ultimate direction you want to take your band in the future? Your Debut album “Phase” was released back in 2017, can we maybe expect a new album?
BB: One. One Direction. I think we have as little of an idea what to expect from ourselves as anyone else. More music? Things to look at? A breakaway government? It hard to say.
CD: Yes! The culmination of our next few singles will be combined with all singles since Falling For You and put into a convenient format where you’ll only have to press play once to hear all of them.

SR: Lastly, what is the weirdest or funniest story from being in a band so far?

BB: We’ve had people on our team quit because they thought we were getting drunk before interviews, turns out we are just stupid. That’s kinda funny.
CD:  I watched Bracher sing “Rollin’” by Limp Bizkit to a maid who was mopping a hotel floor in New York City at 5am before falling asleep minutes later.